The “DUI - Williams” raw video is Nina getting booked at the Chaffee County Jail.

The “DUI - Williams 1” raw video is the body cam of Drew Nelson with a second police officer. 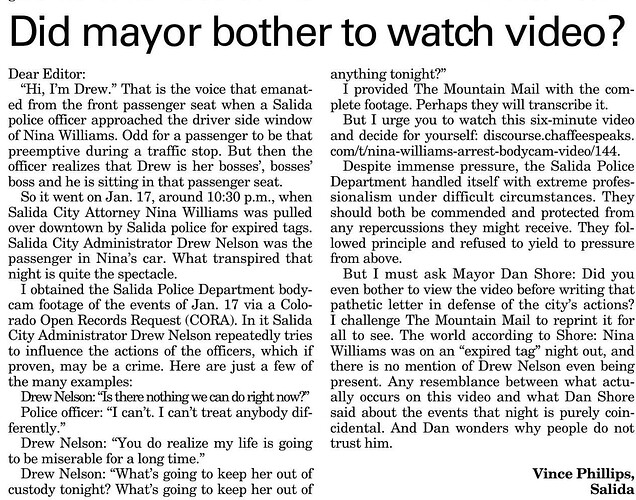 Hey P.T., now that you are running for County Commissioner, where are your high standards for Drew Nelson’s conduct?

As the Salida Mayor who fought to hire Drew Nelson, didn’t you state Drew was not going to drink anymore? Or own guns? Isn’t it a reasonable precaution, that someone with a history of wildly discharging a firearm eight times while intoxicated should never drink?

Nina Williams and Drew Nelson were drinking at Wood’s Distillery the night of her arrest. Who else from City Government was there? Does former Mayor Wood owe an explanation and apology for overserving City Attorney Williams?

P.T. Wood failed to protect this community as Salida Mayor.

Why should we believe he would be any better as a County Commissioner?

Letter from P.T. Wood to the media | Free Content | themountainmail.com

Letter from P.T. Wood to the media 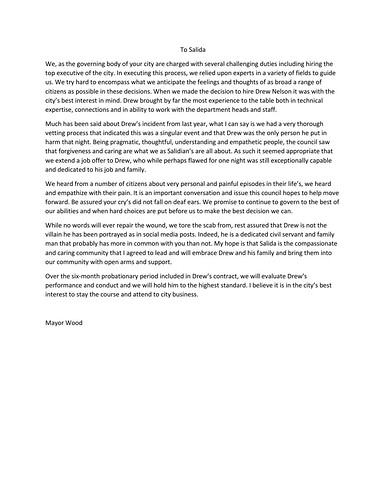 On Nov. 22, after the Drew Nelson forum, Mayor P.T. Wood issued a public letter. After the release of the Nelson arrest affidavit, it appears there are false statements from Mayor Wood.

Wood: “In executing this process, we relied upon experts in a variety of fields to guide us” and “We had a very thorough vetting process.

There is no written documentation of who these experts were/what they said. Did experts use the affidavit as substantiation in the process?

Nov. 22 Wood stated: “Much has been said about Drew’s incident from last year.”

The events occurred in the same calendar year you hired Nelson.

Wood: “What I can say is … this was a singular event and Drew was the only person he put in harm that night.”

This “singular event” took place over at least two days – he beat up a garbage can with the 10-pound sledgehammer the night before; more than one event. The affidavit states Drew had no recollection of firing eight rounds, and the house was in a residential area, with no safe direction to fire the handgun.

Wood: “(H)e is a dedicated civil servant and family man.”

The affidavit states Drew moved out of the family home Jan. 23, 2018, under police supervision. He quit his job in Winter Park. Once he took the Salida job, he lived alone in Howard. His wife acknowledged publicly she still lives in Winter Park.

Nelson lost his last job, exercised bad judgment in quickly applying for this job, misrepresented what happened, exposed the worst parts of his family life and family to public scrutiny. Nelson’s debacle in Winter Park shattered his family. Is this dedication?

Wood: “and we will hold him to the highest standard.”

A former employee filed an EEOC complaint and was fired by Nelson. Other female employees wrote letters detailing concerning behavior by Nelson. One female city employee has been fired and one has resigned since Nelson started Oct. 5. “Highest standard”?

Mayor Wood has also made at least two false statements in council:

The arrest affidavit proves they were accurate.

The arrest affidavit states explicitly this was DV. Mrs. Nelson thought he was going to hurt or kill her. Every local DV expert says this was DV.

Finally, Mayor Wood lied to the citizens of Salida on social media:

“The city council and myself take domestic violence very seriously and we did not make this decision lightly. We thoroughly vetted Drew and this article is completely wrong and utterly inaccurate.

“Your children’s right to life should outweigh my right to assault weapons.”

If he believes this, how can P.T. still justify hiring Drew?

This mayor believes his truth, not the legal affidavit’s truth. Indeed, Mayor Wood seems to actively hide information that contradicted his version of events. Is this what Salida citizens voted for?

Is Drew going to get a good performance evaluation today?

Dan has gone from “How would you like to be judged by your worse moment?” to “What would it look like if it was on the front page of the paper?”