What you need to know about PT Wood

Please read the documents and view the videos that follow.

Being an informed voter is worth an hour of you time.

Do the actions of PT Wood disqualify him as a potential Chaffee County Commissioner?

“You have made it clear you condone domestic violence” said a female Salidan to Salida Mayor PT Wood and City Council on 1/22/19, weeks after they voted to retain Drew Nelson as City Administrator.

Many Salida residents know the story, others in Chaffee County may not. But former Mayor P.T. Wood is running for Chaffee County Commissioner, and labeled his “leadership” as Salida Mayor a major reason you should vote for him.

The controversy? Mayor Wood and Council hired Drew as Salida City Administrator without disclosing his recent criminal record. Just eight months before, on 1/22/2018, Drew Nelson was arrested for “Domestic Violence”. Charges included “Menacing”, “Prohibited use of weapons” and “Reckless Endangerment”.

Salida Citizens detected Sky-Hi News articles about the Winter Park City Manager, which involved severe intoxication, 8 rounds fired from a .45 handgun, and threats against his wife with a ten-pound sledgehammer. Children were present in the home.

Drew Nelson was somehow allowed to plea to lesser charges, had his record expunged, and was sentenced to counseling and nine months probation. He resigned from Winter Park.

The response from all sides of the political aisle was immediate. Citizens rallied, writing letters and speaking in Council Meetings. Their rational, legal and emotional pleas fell on deaf ears. The official response was a litany of excuses. P.T. Wood told us the news article wasn’t accurate, Drew Nelson had been thoroughly vetted, Winter Park officials had said great things about Drew, and we should just trust the process. An information request to the City of Salida for the extensive vetting that was done prior to hiring yielded this response: no documents existed.

Despite the case records having been expunged(unheard of for a domestic violence arrest) information requests to Grand County yielded the original arrest affidavit, and Drew Nelson’s separation agreement from Winter Park. Drew’s former employers and co-workers were not allowed to say anything disparaging about him. So much for extensive vetting. Further, the arrest affidavit not only confirmed that the news articles were backed by official documentation, but the full details were actually worse than the articles had let on.

P.T. Wood was either wrong, or had been lying to the public. In either case, he refused to address these issues, despite public demands.

Most times voters are forced to guess how politicians might handle themselves given the power of office. P.T. Wood’s actions in the Drew Nelson matter are a case study in what not to do: What you need to know about PT Wood. You will find video of Salidans speaking both for and against Drew Nelson, and a variety of documents.

This is the first time PT Wood is facing a contested election since the events in 2018. If he can defend his actions to the public, he should do so. Chaffee County Commissioner is a powerful position with a 4-year term. Please be fully informed before deciding who deserves your vote. 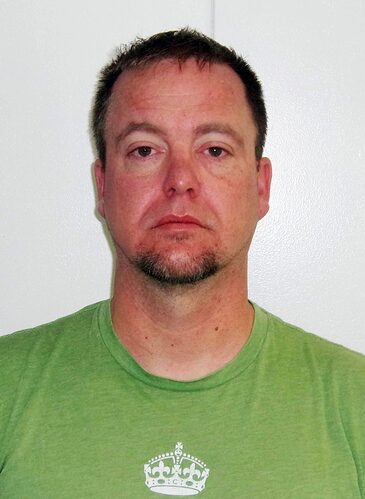 Winter Park Town Manager Drew Nelson was arrested Monday night following a domestic dispute with his wife at his residence in Winter Park, according to the Grand County Sheriff’s Office. Nelson, 40, who is scheduled...

A nervous PT Wood speaks in front of City Council on 10-16. He says if he thought it was a case of domestic violence, he never would have hired him. 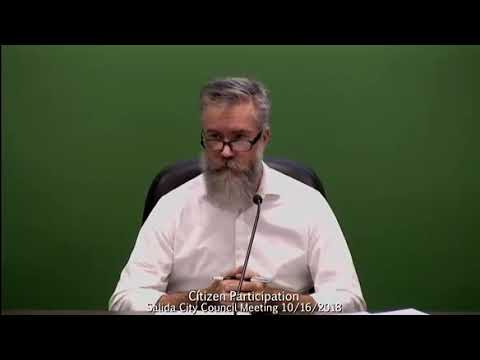 PT Wood’s official response was a litany of excuses. PT Wood told us the Sky News article wasn’t accurate, Drew Nelson had been thoroughly vetted, Winter Park officials had said great things about Drew, and we should just trust the process. 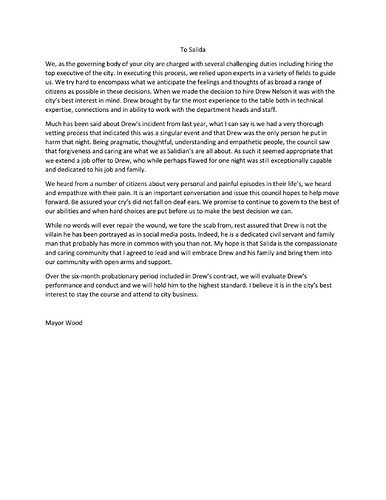 Video of 10 Salida citizens speaking out at City Council meetings against the hiring of Drew Nelson. 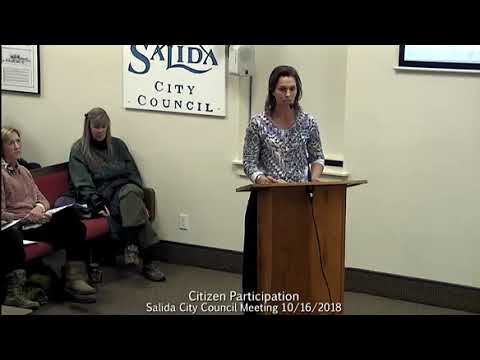 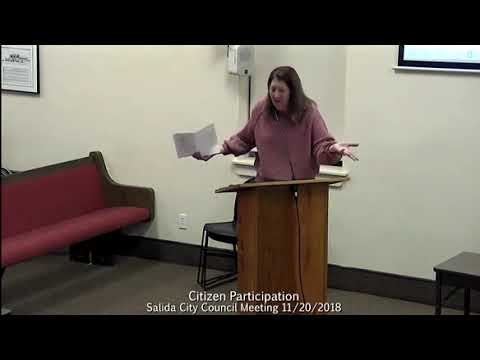 A 11-27-18 letter to the MM editor by Eileen Rogers telling City Council to “Circle the Wagons” around Drew Nelson.

The details are not easily forgotten. The results, however, are of major importance and need reminding. Using the ballot box, Salida citizens demanded civility, resulting in a 70-30 percent overwhelming election margin.

Grateful and with a huge sigh of relief, I retired to care for my husband knowing that four newly elected officials were committed to rule with civility.

A year later, in October 2018, another citizen group appeared at the city council meeting. These participants criticized the current city administrator hiring decision. (Note: Citizens do have the right to criticize council decisions.)

This citizen group went far beyond their right to criticize. Their accusations and behaviors included rumors, uncontrolled anger, distorted information and shouting down of speakers with opposing views. These attempts to humiliate our city administrator included demands for his immediate firing.

Have we forgotten? Do we really wish to return to the state of incivility — the exact opposite of what 70 percent of our voters demanded just one year ago? Is this how Salidans welcome a new city employee?

Government officials, elected to run our city, must choose their city administrator, not by a popularity contest, but by needed credentials. A qualified city administrator brings considerable experience to guide and direct our management team in achieving goals listed in Salida’s comprehensive plan. The city administrator is more important and more valuable than any elected official.

Public criticism of employees is despicable and cruel because our individual employees have no avenue of recourse or response. Imagine walking in any of our employees’ shoes, especially those of Drew Nelson these past few weeks.

Demanding that council decisions be overturned is not the prerogative of citizens. Elected officials in our representative form of government make informed, thoughtful decisions, thus minimizing the mistakes made when emotions run amok in public. Council members must focus on what is best for Salida, using information sometimes not publicly available.

Attorney Tami Tanoue consults for the Colorado Municipal League and CIRSA. The previous city attorney should have provided Tami’s seminar to the newly elected council members.

Tami taught me that every council member is obligated to publicly support all decisions made by the majority. Negative comments made later only encourage second guessing by the citizens (woulda/shoulda/coulda). These are loyalty and ethics issues. Once a decision is made, the council must speak in public with one voice. Government becomes dysfunctional without that requirement.

My recommendation for today’s seated council is to circle your wagons around our city administrator and get to work. Many goals and tasks were improperly completed and/or ignored during 2016 and 2017. There’s enough to do without current distractions taking any more of your precious time.

Video of comments from City Council before they vote to retain Drew Nelson. 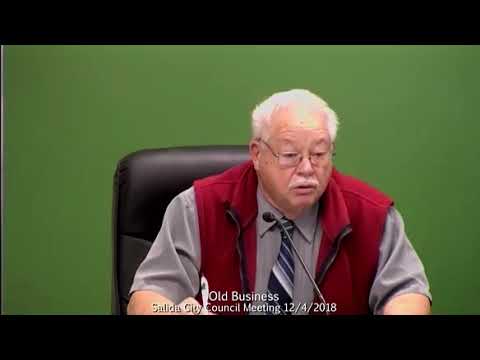 A room of women had gathered to express their shock at the decision, some survivors of domestic abuse themselves. Megan Kahn was the second woman to walk up to the podium that night. She said hiring Nelson sends a message that violent behavior is acceptable. 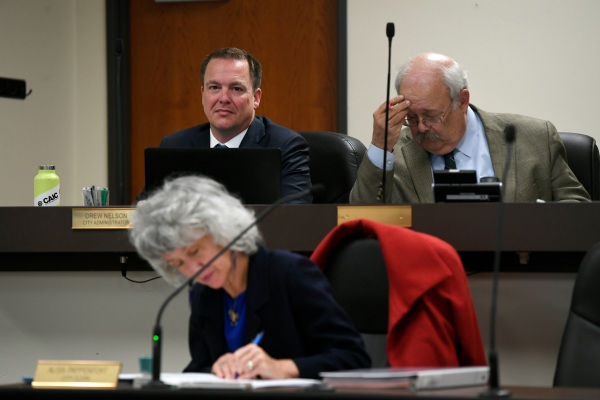 After Salida hired a city administrator with a recent criminal record, the city’s residents began to debate the very questions that have mired the national conversation surrounding #MeToo and…

All three of the City of Salida Council members who voted to retain Drew Nelson are current donors to the PT Wood for Chaffee County Commissioner campaign: Cheryl Brown-Kovacic, Dan Shore and Harald Kasper.

The fourth is Devon Kasper, the spouse of Salida City Councilman Harald Kasper, who is a current PT Wood for County Commissioner donor. Harald Kasper also was one of the 3 yes votes to retain Drew Nelson. Devon Kasper later complained that she and Harald had lost friendships over his decision to hire and support Drew Nelson. Imagine that!

Back in late November, just after the mayor of Poncha Springs objected to the Salida city administrator hiring, former Councilwoman Eileen Rogers urged our elected officials to “circle your wagons” in support of Drew Nelson (Nov. 27).

Dutifully, the Shores, Bomers and Pappenforts of the world answered the call. In the movie “Casablanca” this was termed “round up the usual suspects.” In Salida, we get the same small group of myopic loyalists, willing to back any policy no matter how absurd.

As a councilman, Dan Shore first told us Drew Nelson had a mental illness but was otherwise a great person. He also claimed he would not tolerate any bad boy behavior from Nelson. According to Shore, “the city has a zero tolerance on unacceptable behavior” as far as Nelson goes.

Pappenfort was once sounding alarms about Nelson on behalf of one or more victims. In an email to Councilman Shore last November, she wrote, “Drew needs to be monitored to assure he treats staff respectfully. How about a life coach/staff advocate with an emphasis on eradicating bullying in the workplace?”

So what happened after Nelson abruptly fired former Finance Director Jodi McClurkin? Shore backed the man without further qualification, and on Dec. 7 Pappenfort completed a transformation into Nelson’s cheerleader: “Over time, I have found Mr. Nelson to be professional, responsive and kind.”

But what if the New York Times is right and circling your wagons reinforces a polarized society? In his article entitled “Circling the Wagons” from June 5, 2004, Times columnist (and coincidentally my college classmate) David Brooks observed, “Once they have formed an affiliation, people bend their philosophies and their perceptions of reality so they become more and more aligned with members of their political tribe.”

This leads to politics as a “tribal business,” causes folks to “embrace one-sided attitudes and perceptions” and leads to “subrational partisanship.”

In other words, once the group they belong to does something abhorrent, they go with the flow and adopt a defensive stance which appears irrational to outside observers. Voila – the pro-Drew forces in a literal nutshell.

So what would have happened if Pappenfort and Councilwoman Brown-Kovacic had followed their self-professed feminist ideals and fought courageously for the women of this town who spoke out for female employees who felt ostracized and demeaned by Drew Nelson?

Or if Dan Shore had met his own lofty standards and demonstrated himself to be a municipal leader not ruled by tribalism, but instead by the highest standard for integrity?

We might have wound up with a city administrator who had the support of the entire town and avoided a brutally divisive chapter in Salida’s history.

A good leader is able to listen to and try to understand a point of view, especially when they don’t agree.

I am trying to understand this hyper-nuanced position on gun ownership held by County Commissioner Candidate PT Wood.

People who committed no crime against children should have their guns taken on general principal. Just in case. But Drew Nelson, who discharged a handgun 8 times while intoxicated during a Domestic Violence incident involving his wife and children should be rewarded with a six-figure income? And in his role as Salida City Administrator is the best choice to supervise our Police Department?

Without another explanation, I conclude that PT Wood does not practice what he preaches, and further does not understand the concept of irony.

PT Wood wishes he was somewhere, anywhere else as the clock ticks down on the three minutes citizens were allotted to defend sanity. 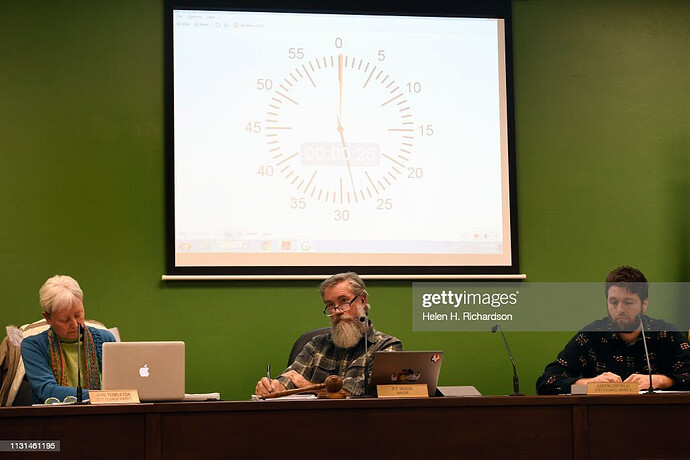